By Walid Al-Saqaf, Internet Society Board of Trustee, postdoctoral researcher at Stockholm University 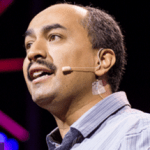 Simply put, the blockchain can act as a virtual public ledger that records transactions processed and maintained by a network of communicating nodes running cryptocurrency software. It was invented in 2008 as part of Bitcoin by a person with the computer nickname ‘Satoshi Nakamoto’. It was envisioned as a peer-to-peer payment system and digital currency that can be transferred between any two users connected to the Internet, without using any intermediary.

While none of the panelists who replied to my intervention[1] ended up talking about the blockchain technology itself, they did acknowledge the need to embrace such new and innovative technologies so that they could be used for the betterment of societies. I thought that was a good sign.

Yet actions speak louder than words. What we need to see are concrete steps in providing funding, resources, and policies that would support the development of projects based on blockchain technologies. Such projects ought to find their way into universities, hospitals, regulatory institutions and other bodies that deal with big data. 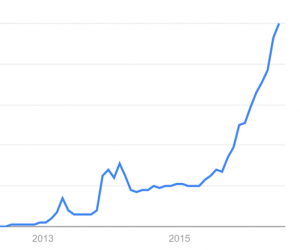 heard of the blockchain technology. Others had heard about it but never truly grasped what it meant and how it could be used. Looking at Google Trends (figure on your right), it is quite evident that the frequency of the search term ‘blockchain’ has quadrupled since June of last year and I expect this upward trend to continue and accelerate.

Recently, it was reported that IBM successfully tested the use of blockchain technology by a major French banking and insurance group to verify the identity of its clients. The report went on to say that those who have deployed the blockchain software found that it “reinforces consistency, traceability and privacy of the information, which is critical in a highly regulated environment.”

I believe that the above example is a solid indicator that blockchain technology is indeed a major technological feat that can be compared to the creation of the Internet itself.

The strength of the blockchain is that it has no single point of failure. The “One Internet” report released by the Global Commission on Internet Governance (GCIG) this week at the OECD meeting specifically mentioned that “distributed ledger technologies” such as the blockchain “let people who have no particular confidence in each other collaborate without having to go through a neutral central authority.”

Applications can range from storing valuable data for permanent preservation to enabling fast and effective delivery of aid with a fraction of the cost and time needed to send it using a bank wire transfer.

What is concerning is that while technologists and businesses have been exploring the blockchain technology and its applications, many governments seem skeptical and not taking it seriously.

In a time when multistakeholder collaboration is the key to addressing Internet-related issues, governments need to learn more about this evolving technology and how it could change the world.

Let us not forget that the Internet itself didn’t get enough attention by governments during its early years of creation. And I fear that policy makers are also not paying attention and are insufficiently informed about the blockchain.

During my OECD intervention, I openly suggested that public policy shapers should find ways to educate and inform themselves about the blockchain and its enormous potential for economic development. It is vital that they harness and facilitate the deployment of such technologies instead of preventing them. I reflected on the need for governments to stay up-to-date and and engage with other stakeholders on Internet-enabled disruptive technologies that are gaining steady momentum.

I am confident that to make the best out of the blockchain and other Internet-enabled disruptive technologies, we have to harness the collective expertise and wisdom of all stakeholders, including governments, civil society, business and the technical community.

Governments of today should realize that it is better to learn and embrace positive aspects of new technologies. They should not ignore them. Embracing new technologies can ensure effective economic development for their countries and the world at large.

Walid Al-Saqaf is a member of ISOC’s board of Trustees. He is also a software developer, an Internet rights advocate, and a postdoctoral researcher at Stockholm University with a passion for promoting a strong and open Internet that netizens can use to promote democratization and free speech.