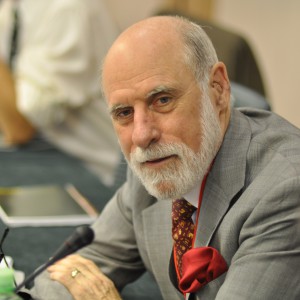 William Gibson is reported to have said: “The future is already here — it’s just not very evenly distributed.” Whether this is an accurate quote or not, it captures precisely what we are (slowly) facing as IPv6 moves from its 15 year slumber from about 1996 to the June 6, 2011 world IPv6 day when many operators of Internet services turned on IPv6 for a day. It was turned on, again, permanently on June 6, 2012. Two years since that time, one is beginning to see growth in the use of this important protocol in support of an expanded address space.

Why is this important? For one thing, we are starting to see more and more devices and appliances outfitted with Internet Protocol capability (“Internet-enabling”). It is entirely conceivable that many billions of devices, from light bulbs to industrial equipment, will become a part of the vast Internet fabric. Interconnection and interoperability open an endless frontier for new applications and services. They also open up new avenues for serious abuse. For anyone working on new applications that rely on Internet-enabled devices, security, authenticity, access control and the like will be fundamental to successful deployment.

The ability to configure many devices to accept control or to supply reports only to authorized parties is part of the challenge. When you bring a new, Internet-enabled device(s) into an already enabled environment, it must be possible to add the new device(s) without accidentally adding your neighbors’ devices by mistake. Making this process seamless, secure and intuitive is not going to be a simple matter and demands serious design attention.

Perhaps there are some lessons one can take from Bluetooth experiences although this process seems to work best for pairing of devices for peer-to-peer operation. Society stands to benefit from the resulting smart homes, smart cities, smart cars and smart personal devices, if we can get the framework right. Gathering health indicators on a continuous basis may allow prompt diagnosis of serious conditions, for example. Tracking traffic may allow cities to manage traffic flow and monitor resource usage to avoid brownouts or other resource shortages.

I am convinced that devices such as Google Glass, among others, may open the door to a number of beneficial applications in which local and remote computers can be used to process sensor information, produce augmented reality effects, and help us react in near real time to changes in our immediate environment. One can already see early efforts to achieve real-time translation of spoken languages, translation of text documents viewed through a mobile lens, and speech synthesis to guide visually impaired users to new destinations.

Sometimes, I wish I were 8 years old so I could see what the world will be like in the 22nd Century!

Vint Cerf is an American internet pioneer, who is recognized as one of “the fathers of the Internet”, sharing this title with American engineer Bob Kahn. His contributions have been acknowledged and lauded, repeatedly, with honorary degrees and awards that include the National Medal of Technology, the Turing Award,  the Presidential Medal of Freedom,  and membership in the National Academy of Engineering.